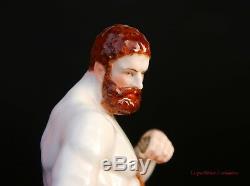 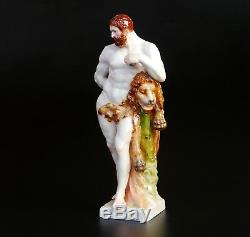 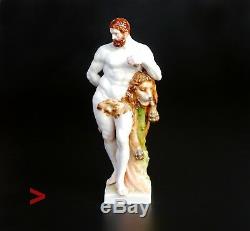 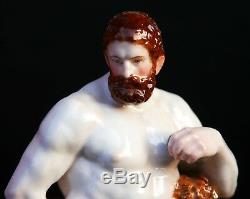 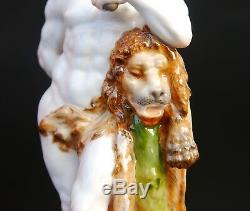 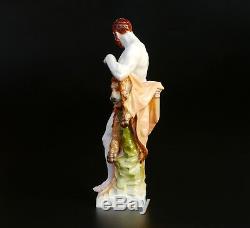 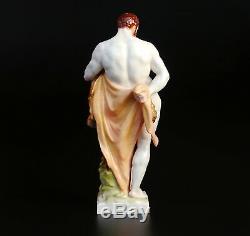 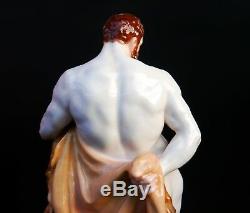 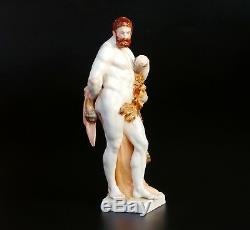 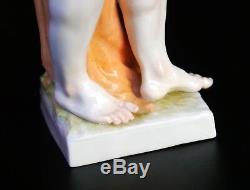 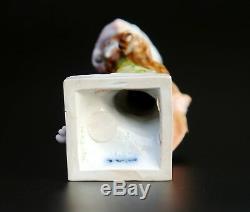 Ery rare and exquisite KPM Royal Berlin porcelain figurine of Heracles - a divine hero in Greek mythology, the son of Zeus and Alcmene, foster son of Amphitryon. He was a great-grandson and half-brother (as they are both sired by the god Zeus) of Perseus. He was the greatest of the Greek heroes, a paragon of masculinity, the ancestor of royal clans who claimed to be Heracleidae. In Rome and the modern West, he is known as Hercules, with whom the later Roman emperors, in particular Commodus and Maximian, often identified themselves. The Romans adopted the Greek version of his life and works essentially unchanged, but added anecdotal detail of their own, some of it linking the hero with the geography of the Central Mediterranean. Details of his cult were adapted to Rome as well. Hercules is known for his many adventures, which took him to the far reaches of the Greco-Roman world. One cycle of these adventures became canonical as the "Twelve Labours". Was to slay the Nemean lion. After slaying the lion, he tried to skin it with a knife from his belt, but failed. He then tried sharpening the knife with a stone (here he holds it in his left hand) and even tried with the stone itself. Finally, Athena, noticing the hero's plight, told Heracles to use one of the lion's own claws to skin the pelt. This particular figure seem to be an interpretation of one of the most famous depictions of Heracles, Farnese Hercules - Roman marble statue also created on the basis of an original by Lysippos, 216 CE.

Presently demonstrated at National Archaeological Museum, Naples, Italy. There are some differences: on Roman version posture differs a bit, head looks down and not to the right side, left hand is empty and open also being positioned differently and private parts are not hidden. Eautiful over - glaze hand painted figurine of a nude famous Athlete with great attention to masculine anatomy. Marked and dated to base KPM with Orb and Scepter marks.

In accordance with present marks this particular figure was made in first quarter of XX cent. I don't know the name of the sculptor. 16 cm high, base is 4 cm x 4 cm. In excellent condition, no damage or repairs.

The item "1920s KPM Berlin Herakles Hercules Porcelain Figure Figurine" is in sale since Friday, January 4, 2019. This item is in the category "Antiques\Decorative Arts\Ceramics & Porcelain\Figurines". The seller is "optimistic555" and is located in CPH.