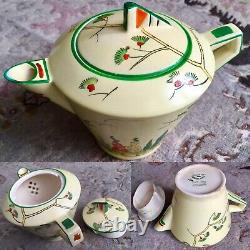 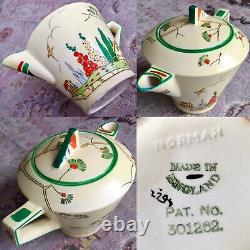 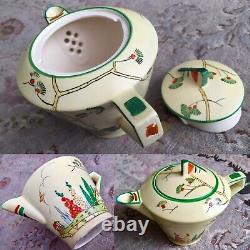 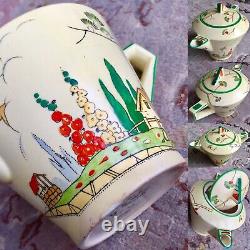 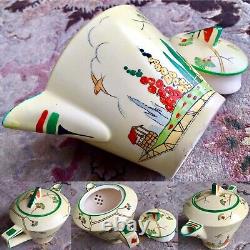 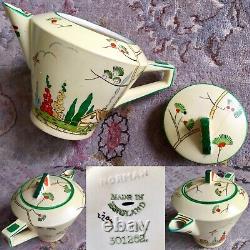 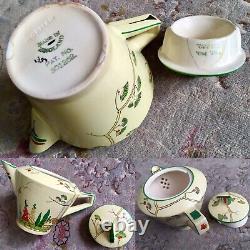 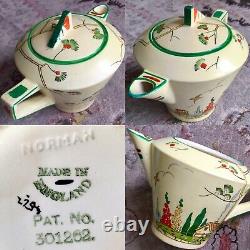 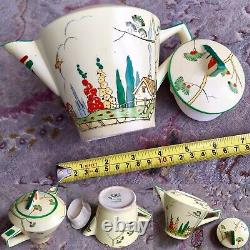 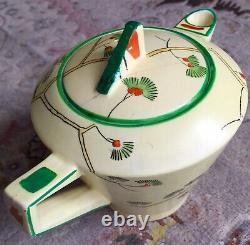 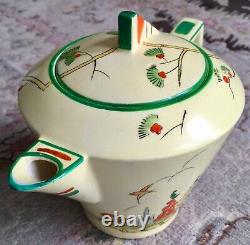 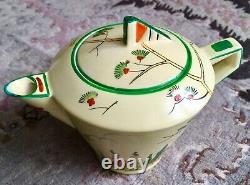 Please browse all 12 sets of photographs attached for size and condition as they are self explanatory. In designing this marvellous pattern the Grimwades company had taken its inspiration in from the Art Deco period. The design was way ahead of its time and is now extremely rare and collectible. It would not look out place in a modern contemporary environment. Needs to be seen and handled to be fully appreciated as the photographs really do not do it justice.

An absolute one off item. Very hard to find indeed.

Beautifully handcrafted, hand painted teapot with raised paintwork similar to Japanese moriage artwork. Work of a master potter of the highest order. This item was only made during the late 1920s and very early 1930s so it is close to 90 to 100 years old and condition is commensurate with age and not perfect but all chips and hairline cracks have been expertly restored.

I suggest this item ought not be used although it can be and due its rarity and condition it is best kept as a collectors item. We have had it in a locked glass cabinet for as long as I can recall. Please note the area around the inner rim appears to be chipped but these two areas are not chips and part of the ingenious design of this teapot and its cover.

The cover goes on to the base at an angle. The design for its age was very advanced and breathtaking really. Needs to be seen and handled close up to be fully appreciated. Leonard Grimwade was born in Ipswich about 1863, the son of Richard Grimwade.

He began his business life with his uncle as a dry salter in Ipswich. He came to the Potteries as a modeller but quickly moved to manufacturing. He was joined by his brother, Sydney, by 1886, and worked the Winton Pottery. The style became Grimwade's Ltd. The invention helped to make the litho process commercially viable. He is also credited with installing the first continuous process kiln, in 1901. In this process, known as the Climax kiln, the ware was packed into iron cages on wheels.

A serious fire at the Winton factory in 1916 led to Leonard Grimwade's proposing that Stoke on Trent should have at least three motor fire engines. A Liberal free-trader Leonard Grimwade was elected to Stoke upon Trent council and was also appointed to the local magistrates' bench. He was secretary of the Potteries Association for the Promotion of Federation, founded in 1907, and published 160 favourable replies to a circular letter to leaders of trade and industry in his Book of Opinions. Questioned by counsel for Fenton during the passage of the federation bill through Parliament and asked where he Iived Leonard Grimwade replied'I sleep in Wolstanton but I live in the Potteries'. He unsuccessfully contested the parliamentary election in Hanley as a Liberal in 1918.

He was a member of King Street, Newcastle, CongregationaI church. He modified his free-trade views to some extent during the First World War, by which time his five factories employed 1,000 people. He married twice and had two sons and two daughters. His first wife, Marion, was elcted to the Stoke Board of Guardians in 1897. He was killed in a road accident on 26 January 1931 and was buried in Hartshill cemetery.

Sources: Jewitts, Pottery Gazette 2 March 1931; VCH ii. The Royal Winton brand has always been synonymous with quality and design and has roots in Stoke-on-Trent, England that go back over one hundred years.

Originally known as Grimwade Brothers it was founded by Leonard Lumsden Grimwade. Leonard had shown a natural talent for modelling pottery and it was in this field that his infant business began, in 1885. He was soon joined in the business by his older brother, Sidney Richard, another potter.

It is a measure of the company's success that by 1906 Grimwades Limited was operating from four factories in the potteries. Leonard experimented with new methods of manufacture and he developed the enamel climax Rotary Kiln, Duplex Lithographic transfers and other ground breaking techniques. In 1913 King George V and Queen Mary visited the potteries and the brothers issued a catalogue to commemorate the event. In 1928'Marguerite' the first Royal Winton Chintz pattern was launched and was an immediate success.

These tightly grouped, highly detailed and vibrant all over floral patterns were to become a milestone in the company's reputation for versatility and beauty. Following an advertisement in the'Potteries gazette' in 1929, Royal Winton became the established trade name for Grimwades Limited and has remained so through to the present day.

Leonard Grimwade died in 1931, but his legacy survived and the company went from strength to strength under the leadership of James Plant. Over succeeding decades Royal Winton introduced more than 60 Chintz patterns and became the leading producer of this style of decoration, exporting to most commonwealth countries and the USA. Discontinued in the early 1960's due to the high production costs associated with this style of decoration, Royal Winton Chintz has become highly desirable in the antique market today. Collectors Clubs have been established world-wide and many reference books have been published, with Christie's of London running auctions dedicated to Chintz pottery.

Chairman Ian Davis commented It soon became apparent that we had acquired a company with a unique heritage. Since acquisition some of the more popular Chintz patterns have been reintroduced on a range of giftware, tableware and limited Edition pieces.

Hand crafted in the'Potteries', Staffordshire England; Royal Winton Chintz undergoes eighteen separate production processes and is fired four time. Old lithographing techniques have been resurrected to achieve the all over floral effect demanded by Chintz lovers. The year 1995 has been incorporated into the backstamp of the new Chintz to avoid confusion with antique pieces. In March 1997 the first new piece of Royal Winton Chintz for nearly forty years was introduced and unveiled at the chintz convention in Pasadena, Californa. A spectacular piece, an 11 octagonal vase in the Florence pattern, it received resounding approval.

The company has witnessed many changes over the past century but one thing has never altered, its dedication to quality, design and beauty which excites many buyers from around the world. The item "Rare Antique Art Deco (1920s) Patented Royal Winton / Grimwades Norman Teapot" is in sale since Monday, July 29, 2019. This item is in the category "Pottery & Glass\Cookware, Dinnerware & Serveware\Dishes". The seller is "santoor-uk" and is located in Ladywell (Near Eccles), Greater Manchester.

This item can be shipped worldwide.